Remains of a bunker disguised as house at Maybach I in Wünsdorf-Zossen, Germany

The founding of the OKH and OKW

As part of Hitler’s plans to restructure the German Army, the OKH or Oberkommando des Heeres (Eng: Supreme High Command of the Army) was founded in 1935 and made responsible for planning and delegating operations of Armies and Army Groups. From 1938 the OKH was formally put under the command of the newly formed OKW (Oberkommando der Wehrmacht or in Eng: Supreme High Command of the Armed Forces) ,but in practice all the orders given from the OKW to the OKH needed Hitlers consent until his suicide in 1945.

The OKW and OKH commands were stationed in two separate facilities in the forested area between Zossen and Wünsdorf, Brandenburg, just some 20 kilometers South of Berlin. Two nearly identical bunker complexes, Maybach I and Maybach II, were built between 1937 and 1940. Typical for both organisations mutual relations, the complexes were separated by a fence.

German officers posing in front of the Heeressportschule at Truppenlager-Zossen

The area at Wünsdorf-Zossen had been connected to the German Army long before the outbreak of WWII. The Army’s most important “Übungsplatz” or training facilities and large army barracks complex known as “Truppenlager Zossen” were located here since 1910. Almost all German soldiers of that time past through here during their training. During WWI the area also situated different “Kriegslager” (Eng: POW camps) among which the famous “Halbmondlager” (Eng: Half Moon Lager) which housed around 5000 largely Muslim Allied prisoners, who built the first (wooden) Mosque in Germany. 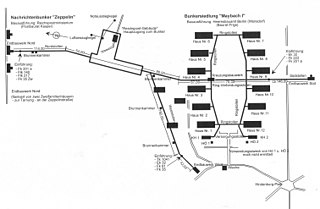 In 1939 the “Maybach I” complex became fully operational to house the OKH. The complex consisted of various structures with at it’s heart twelve bunker “houses” existing of three levels above ground and two subterranean levels. To conceal their military function, the buildings above ground were made to look like local civilian houses, with shingled roofs and plastered walls. Non existent window cells and doors were added and steel armored bunker doors were decorated with wood to look like normal ones.

Underground the “houses” were interlinked by a so called “Ringstollen”, which was part of an even larger network of underground tunnels and underground bunker rooms. These tunnels were fitted with facilities like drinkwater wells, machine rooms and air filter systems to survive an attack or siege. A main tunnel constructed in 1939 running from the North to the South end connected the Maybach I “ringstollen” with the Zeppelin communications bunker.

In the center of the oval square between the houses stood an air guard tower to strike alarm in case of an air attack.

House 2 of the Maybach I complex at Wünsdorf-Zossen, Germany

The name “Maybach”, mostly associated with the eponymous German company that manufactured cars and engines, was given to the complex to lead friend and foe to believe the complex was part of it’s production facilities. Construction workers and locals were only allowed to work at the site for a limited term, so they would never gain too much knowledge about the scale or purpose of the complex.
The name of the underground communications bunker “Zeppelin” also added up to the myth, as Maybach produced the engines for the German Zeppelins before and during WWI, as well as that the “Maybach Zeppelin ” was a legendary twelve cilinder luxurious limousine built by the company during the late twenties and thirties.

Another view of the facade of bunker house 2

View of the bunkers scattered over the forest floor at Wünsdorf-Zossen, Germany

Maybach II was finished a year later in 1940 to house the OKW and was of a similar concept and design with eleven surface buildings. Near the end of the war the complex was heavily damaged during bombing raids and largely abandoned.

In 1946 the Russians demolished the remaining structures and rendered the complex useless.
We hope to look for the remains of Maybach II and extend this item in the near future.

Telecomunications operators at work in the Zeppelin Bunker in 1942

The Zeppelin bunker was built at the same time as Maybach I, between 1937 and 1939, as an underground communications bunker. Because the bunker was officially constructed by the German Reichspost as a “Service Building” on the orders of the OKH, it was also designated Amt 500. The bunker was roughly shaped like an “L” of which the longest stretched part (117 x 22 meters) consisted of two floors and the shorter (57 x 40 meter) a three-storey annex.

The underground building could be accessed by the underground tunnel system which was also connected to the “Ring stollen” of the Maybach I OKH complex. Three entrances called “Endbauwerk North”, “Endbauwerk Sud“ and “Endbauwerk West” located at either end of the system gave acces to it. These entrances were also camouflaged as normal civilian houses. But in 1938 the”Reichspostgebäude” was eventually constructed as a surface bunker directly over the annex of the Zeppelin bunker, which gave access to it via a staircase and even a freight elevator.

Pictures of the former entrance buildings camouflaged as houses

Starting from the 25th of August 1939, just in time for Hitler’s Polish Campaign, “Zeppelin” would be the largest and most important telecommunications center of the Wehrmacht during the Second World War. It remained operational until the end of the war. Because of the rapid occupation of the area Zossen-Wünsdorf in April 1945, the Zeppelin bunker, together with it’s equipment and installations fell into the hands of the Red Army relatively unscratched.

Walking towards the Reichspost-Gebaude entrance of the Zeppelin communications bunker at Zossen-Wünsdorf, Germany

Plan of the Reichspostgebaude entrance staircase to the Zeppelin bunker Zossen

Staircase leading down to the Zeppelin bunker

Various items on display inside the Zeppelin bunker

The so called Umformerraum at Zeppelin

Russian graffiti on the wall in the Umformerraum

Staircase leading up to Endbauwerk West

At the end of the war the Russians took over the Wünsdorf-Zossen military grounds and largely demolished the surface buildings and bunker houses of Maybach I and II. This was Allied protocol for most German military installations and structures. The Zeppelin bunker however was left largely intact, apart from the detonation of the former telecommunications room. This blew a large hole in the bunker roof, which eventually led to the flooding of the bunker by ground water.

The hole in the roof that was left by the bomb blast at Zeppelin bunker Zossen-Wünsdorf. Notice the thickness of the concrete compaired to the room underneath.

But when the cold war started in 1950, the Soviets drained the bunker and renovated Zeppelin and the tunnel system to house their High Command of Soviet Troops in Germany. They even upgraded the bunker to be nuclear proof. The Wünsdorf-Zossen area remained one of the most important Soviet military intelligence bases in the GDR until it was dismantled and abandoned in October 1992.

Visit Maybach I and the Zeppelin bunker

The area of Wünsdorf-Zossen is a definite must-see when you get the chance. If you are in Berlin it’s a nice day trip to get away from the big city. For a WWII enthousiast, it is very exiting to find yourself at the place which was once the beating heart of every German campaign or operation you read or heard about during that period.
To access the Maybach I complex and the Zeppelin communications bunker it is best to go with a guided tour. You can find the office at the Zehrensdorfer Straße 12 in Zossen. They are very friendly people that give regular tours at set times.

4 thoughts on “OKH Headquarters Maybach I and the Zeppelin bunker – Wünsdorf-Zossen, Germany”

4 thoughts on “OKH Headquarters Maybach I and the Zeppelin bunker – Wünsdorf-Zossen, Germany”

When the Second World War broke out, the airfield was officially closed in 1940 and the hangar blown up. Initially the Germans did not...

The area of Hook of Holland was declared a "Festung" of "Fortress", because of it's strategic importance as a Kriegsmarine Harbor at the North Sea and...